Around the nation, teachers everywhere are falling down in their beds, exhausted from the first day back after the Winter Holiday. And more than a handful are probably questioning their sanity for taking on a job such as teaching.Probably an equal number are happy to see their kiddos again, and I imagine there’s a great deal of crossover between the two groups. I know my feelings are a bit mixed on the subject…

I really do love my kiddos. In many cases, I see some of my students more than their own parents do, so when I refer to them as my kiddos, I take that title very seriously. Other than Pepper, my fur-baby (see the pic, isn’t he cute?), I don’t have children of my own (yet), so my students are my children. You mess with my kids, you mess with me, buddy! So watch yourself!

But, let’s be honest, they’re not my children. You know how I know that? Because I’m often not privy to important information that I SHOULD know. I’m still unsure why parents don’t disclose more info to schools/teachers. I do understand that often they don’t want their children labeled a certain way. I get that, I really do, but there are just some things a teacher should know! Things that NOT knowing put the child, other students, the teacher, and who knows who else at risk.

My journey into the insane world of teaching actually touched on a bit of insanity today. In order to not break any confidentiality laws, I won’t disclose the details of what happened today. Suffice it to say that there was an altercation between 2 students today which involved art supplies. Some of those supplies may or may not have included a pair (or pairs) of scissors.

The insane part is that there was no provocation. No indication that anything was wrong. No tell-tale signs that the two students had any problems with each other. One minute we’re preparing to do a fun (in my opinion) assignment where you cut and paste and get to act as a CSI (sort of) to solve the mystery. The next thing I know, there’s turmoil, and one student is looking as if there is no comprehension of what said student just did.

When I contacted an administrator, and was trying to explain that there was no escalation (this was not something I could have prevented, in other words), I kind of joked that it was almost as if the kid had some sort of psychotic break. The behavior was completely irrational and didn’t seem at all like this kid’s normal behavior…

Whether or not there is an actual psychological issue is confidential information, and is not up for discussion. I’m still working out some of the details anyway, but I was not made aware of any such issue prior to today’s incident. And that’s kind of the point.

What if there is a problem? What if this student has some sort of psychological disorder, and I don’t know about it? There were two students who just suddenly disappeared from my class roster early on in the year because it was determined that they had some sort of psychological or behavioral issue that meant they needed to be put in a different class. And again, there was nothing (that I could see) that warned me.

In a post Columbine (or pick a more recent shooting, Columbine happened my senior year of high school and so is permanently burned into my brain) world, wouldn’t it make sense for teachers to know about these things? Or is it because of things like Columbine that parents go out of their way not to tell anyone of their child’s psychological problems?

It seems to me that not telling anyone of a child’s problems only makes the problem (or problems) worse. For one thing, you’re telling the student that there is something wrong with him/her, something so shameful as to not be spoken of out loud. Secondly, if something goes terribly awry (like it very nearly did today) and someone gets seriously hurt, the blame gets spread around. After all, can we blame the child for something he/she might not have been able to prevent?

Do we blame the teacher for not preventing a preventable outcome?

Do we blame the parents for not informing the proper authorities of the situation?

And in cases where whatever mental/emotional problem gets so out of hand that someone actually dies, does all that blame bring closure to the families who have lost someone they loved? I definitely don’t have all the answers, but I know that you can’t bring someone back from the dead with an apology.

I also know that more than likely, given the current cultural view of teachers, that the teacher will get the majority of the blame. Teachers are given the task of educating and molding the future leaders of this country, but we’re given constant limitations as to how and what we teach, and what consequences we are allowed to give students.

If you Google “teachers leaving profession”, you’re bombarded by articles from all over the country about the problems in schools. Most notably that teachers feel that they are glorified babysitters who are undervalued, underpaid, and faced with higher and higher expectations, while the students are given no incentive to be successful. Students are told to do well, but parents and administrators expect teachers not to make the students responsible for their own education. The result being that kids expect you to give them an “A” for just showing up. And yes I have had that conversation with a child. “But Miss, I showed up every day…” Do you really think you deserve an “A” for that? “I don’t know.”

I know that daily I’m told by at least one student that “Miss, this is boring.” Well, yeah, we’re doing grammar. There are only so many games we can play before we actually have to write, or edit, or read something. Even I think Grammar is boring…

But I’m expected to entertain the kids. I put on a one-woman comedy show on a daily basis to keep them entertained, and when we HAVE to do something unpleasant, you’re going to tell me it’s boring?

Anyway, the rant ends there. The system wasn’t broken in a day and it won’t be fixed in one either. This is definitely a profession for mad individuals.  But I wouldn’t trade this job for a million dollars. I love my kids, and I love seeing them be successful, particularly when they earn it. 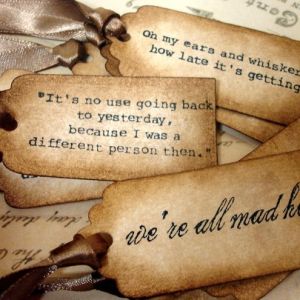 3 thoughts on “Down the Rabbit Hole”