So, as I mentioned in my last post, I know it’s not confirmed that I have Asperger’s Syndrome, but I’ve done the research, and I’ve taken the handy dandy online tests, and suffice it to say, I’m convinced. I probably need to go to someone who’s trained in diagnosis, but I can see the signs, and frankly, I feel better just knowing that it’s possible.

The irony is that I only ever started looking it up because my mother was convinced that the Boy was an Aspie. After doing the research, I’m not as convinced he is, but I feel convinced I definitely am. For one thing, he gets sarcasm way better than I do, and makes fun of me when I take things too literally. It’s why I had so much trouble with his guy friends who exist in a world of sarcasm.

Obviously I get simile and metaphor and whatnot… I just have to be in a place for such things, like when I’m writing and I know I don’t mean it literally, or when I’m watching a comedy show and am prepared for sarcasm and slapstick humor.

Although… my need to take things literally would explain why I am so uncomfortable watching things where the characters should feel embarrassment, yet don’t. I understand on a literal level how wrong whatever they are doing is, and it bothers me. Hence movies like Meet the Fockers and anything with Will Ferrell in it is really unpleasant for me.

There’s even a word for it: myötähäpeä. 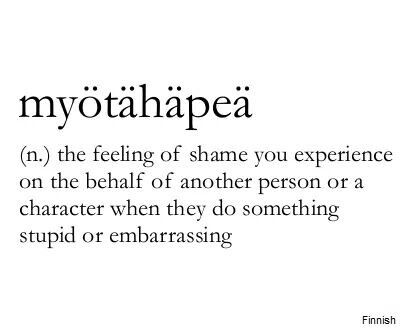 But there are other things that convince me as well: like my hyper focus on certain things.

I always get super interested in the people I date. I think that I’m giving them space, but expect them to be communicative with me, which means I expect to hear from them a lot. Like with the Boy: while he initiated the all day conversations that used to happen in the very beginning, it was my need to know all things about him that made me push even when he wanted to slow down. I need a certain level of communication with him in order to feel like we’re making progress, even if that progress is just a friends thing.

And then there’s the Artist, who made a point to tell me that I obviously didn’t respect myself enough because I was still trying to interact with him on some level even after he treated me badly. Really badly. Like should have made me never want to speak to him again after how he treated me, but I’d established what his purpose was, and thus was willing to put up with the other as long as he fulfilled his purpose.

Even that sentence suggests to me that I don’t think like normal people. Normal people don’t assign purposes to the people in their lives, but I do. Every person in my life has a purpose, except the very rare few who make it into the innermost circle. And probably even then, though the lines get blurred and I forget what their purpose is because they fulfill many purposes for me.

Even when I talk about my friends on here, I’ve grouped them into categories based on their purpose.

My book club girls are primarily for allowing me to be girly, which I’m not good at, but I can dress girly to fit in while we discuss books and movies over light food and coffee, tea, or wine, depending on the situation. We can talk manicures and pedicures, and talk about dating. They enjoy hearing about my latest dating debacle, or getting the juicy details about some of the men who’ve made it to the more intimate levels…Both the good and the bad.

While my Geek group allows me to really delve into my science fiction and fantasy side without feeling like I’m abnormal because I know the difference between a Vulcan and a Romulan, or that I know a handful of phrases in Klingon. Plus, comic books are my new thing, and while I haven’t read that many, I’m slowly getting involved in that world.

Yet, now that I know what I’m looking for, I see how my interactions with both groups are determined by my Asperger’s Syndrome. While thus far my Book Club Girls have enjoyed my tales about dating, sometimes I may take the conversation too far, and discuss details that probably shouldn’t be spoken of in polite conversation.  Similarly, some of the guys in my Geek group get more information than they might like, or I might attempt to make a joke that later I realize I shouldn’t have said, because I have no idea that what I’ve said is inappropriate.

For instance, I made a joke about a particular type of drink, it was a shot named after a sex act. You know, the one where you grab the shot glass with your mouth and take the shot without your hands.

The place we were used shot glasses too big for such a thing, and I made the comment that I’d perform the act on someone if they could fit the shot glass in their mouth. In hindsight, I shouldn’t have said that. I was attempting to be humorous because it was an impossible task, and therefor would not happen. This is funny to me. It was also quite funny to watch several very manly men trying to shove an oversized shot glass in their mouth. But, like I said, it was probably an inappropriate thing to say. For one thing, it also put me on the dating radar of a couple of the  guys there.

I think this is one of the reasons why I used to hang out with gay men. They didn’t mind my inappropriate comments, and I could joke like that and not worry that anyone would take me seriously.

There is a difference.

I could literally perform the act, had someone been successful, but because I was quite certain it was an impossible task, it was silly of any one to take me seriously.

The problem I had with the Boy’s friends would be that they would say something that wasn’t literal, and I had to distinguish the difference, sometimes meaning I wouldn’t laugh at something that was funny, or that I would find myself saying things like, “I know that’s supposed to be funny, but it’s not possible.”  Or explaining how impossible it was.

The Boy pointed it out on our last outing, when I gave him his watch for his birthday. He made a joke at my expense and I immediately reacted, and he commented that I went from ok to upset in just a few seconds. He had commented that a new female friend of his had a sense of humor. The insinuation is that I don’t. And even though I was pretty sure it was a joke, I had to ask a few minutes later just to be sure.

And that’s just a handful of things I’ve noticed: taking things literally, not recognizing when a topic is inappropriate, fixating on topics (and people) with a hyperfocus, categorizing things (and people), not to mention that all my life I’ve needed a plan, and that I absolutely have to think out all the possible scenarios of how it could go, both right and wrong.

It’s one of the reasons that I have trouble with the Boy. I’ve gotten so good at it, that most people think me psychic because it’s just become instinctual to look at a thing and look at all the possible outcomes. The Boy always does something that I haven’t accounted for. And since I do recognize some of the Aspie traits in him, it boggles me that I can’t figure him out.

And I’ve spent a lot of time studying theater and literature to try to figure out how we all fit together. I feel things too strongly, being affected by the feelings of other people in the room, and sometimes that gets mistaken for me being able to read facial expressions, but as I said before, I don’t look at faces all that much.

I’ve learned to be expressive because I learned through theater to fake it, which is something I do instinctively. I mimic people. Their movements, mannerisms, accents, and I’ve never realized quite why. I always assumed it was some sort of adaptive trait I developed because I am adopted and don’t quite fit in with my family and the small town where I grew up. After reading the stories of other Aspie women, I realize it’s a thing that a lot of Aspie women do.

What makes it even harder is that, if I do have Asperger’s (which I am quite convinced I do), I’m an extrovert Aspie. They do exist. One of the things I read was about how they will even interact with strangers, which I do pretty regularly. There’s a need to connect with people, but the lack of understanding of boundaries manifests in a couple of ways:

1) An Extrovert Aspie will jump right into other people’s conversations if it’s about something they’re interested in. I like to help people, so I might help them if I can tell they’re lost and I know where they are, or if I hear someone talking about a movie I liked, I’ll jump in to talk about it. An old friend of mine used to get frustrated with me when we’d go to IHOP because I might turn around and talk to the table behind us because I agreed/disagreed with what they were talking about. I have on more than one occasion invited people to join my table if I found their conversation to be interesting enough.

2) If uncertain about the social rules (which I find is a problem I have a lot), they might shut down and seem stand-offish, while still trying to get their two cents in here or there. Like sometimes when I’m out with my Geek group, there might be someone who strikes me as silly because they joke too much and, as we’ve established, jokes are hard, so I will ignore them because they are too difficult for me to deal with. Meanwhile, I’ll talk to the people I know, or might give a counterargument to what the difficult person has said, but if at any point, it seems like they have become more accepted into the group than I am, I’ll shut down completely.

It’s a kind of catharsis for me, I think. Somehow knowing I’m not alone gives me the power to open up about some of the things I’ve been dealing with on my own, in silence for years and years.

My only fear is that I’m going to lose friends because they’ll think I’m weird, or just won’t believe what I’m telling them.

And maybe that’s okay, too.

The Boy told me today that it’s okay for me to be upset about things, like I was about the disruption of my non-existent routing this morning, and that he felt like a huge burden would be lifted once I learned, as he put it, “not to give two shits.”

5 thoughts on “I think I am an Aspie”