Thanks again to R. Harrison for giving us some insight into his writing process! Writing historical fiction (especially historical romance!) is a gift, one that obviously requires a great deal of research that I, personally, don’t think I’d have the patience for.

Well, maybe if it was set in ancient Greece.

One of the pluses of being an Aspie is having great focus on things that interest me. I have always had a fascination with ancient cultures, particularly since I was about 12 and had a recurring dream that I was born on the island of Atlantis shortly before it sank. 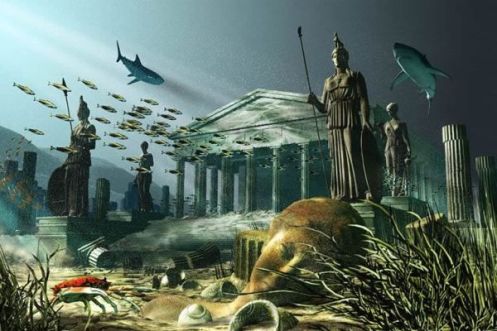 Psychology suggests that it could be related to being adopted. I imagine myself being a survivor of a lost culture so unlike the one in which I live that it helps me to deal with my abandonment issues. There’s some credence to this theory because, when the dream comes back (which it used to do quite frequently), I’m usually going back to the island, now abandoned, and am looking for proof of who I am, often in the form of a ring that acknowledges me as the rightful heir.

Then again, I’ve also recently learned that many Aspies feel this feeling of being totally alien in their surroundings and apparently some, like me, come up with a fantastical reason to help them cope with being so very different. For me, I’ve created an entire elaborate fantasy surrounding the idea that comes up in my dreams, the ones where I am the rightful heir. The fantasy involves me trying to get back to my island and finding a way to bring the rest of the survivors home.

Occasionally, I incorporate characters from movies or television shows that I like into the celebration of the home-coming…often as suitors vying for my hand.

It’s a very in depth fantasy. Those days that people think I’m just depressed, I’m actually relieving my stress by imagining that world, that life in my head, though, yes, I might very well spend all day in bed with snacks and a big bottle of water while I go in and out of that fantasy.

I don’t know if other Aspies do that, but it’s something that has always soothed me. Between my interest in classical cultures, psychology, relationships, and words, It’s become a really fascinating world. The only world I haven’t been able to put on paper properly.

Twice now I’ve tried to recreate it, set in the current times, with my protagonist being me: the lost heir trapped in a world totally foreign, living an unremarkable life. Like The Princess Diaries, but with a crazy Atlantis twist that involves an Indiana Jones style quest to figure out how to bring the island back from the depths of the ocean.

Going back to our discussion of how my character’s meander, both times I’ve tried, my characters have gone down proverbial rabbit holes and I’ve lost them on some side quest or subplot.

I think perhaps it’s because I’ve never gotten to the end of my fantasy in my head, so I don’t really know what the end is, or what it should look like. Perhaps I’m just too close to it.

Or perhaps my problem is that I’m trying to set it in the current time when in my fantasy it’s timeless. When on the island (or on the super cool underwater vessel that takes me to the island) the dress is more akin to the Greek style, though there are elements of the fantastic. Most of my outfits are more like elven finery from DnD or cosplay, for example.

Obviously not exactly historically accurate, but fun for me.

Which kind of brings us back to R. Harrison’s post. He really has some really useful tips, particularly about characters and the formula of Romance from his first post, which was more general.

But I definitely appreciate him coming back a second time to share with us the specific details of his genre.

Since this month long study was designed (selfishly) to help me to perfect my writing, perhaps the universe sent him to me so that I would realize that I needed to do some more research and perhaps that is why I haven’t been able to finish my original story: it lacks authenticity because of the lack of historical continuity.

Of course, history sometimes isn’t always how it seems…

But that is an entirely different story. Let’s deal with one story at a time…

The Secrets of Seashells is still going well. If you’re new to this blog, that is the name of the book I am hoping to publish this year. It’s not quite complete, though I am making quite a bit of progress on it. If you’d care to read a little, I have some of it posted over at Tablo here.

There are a million different ways to get published, but I really want to stick with Something or Other Publishing. It’s a company that basically helps to ensure success. Their goal is to help you build a reader base before you publish to ensure that you will, in fact, be a hit.

How do they do that?

By  only offering you a contract after you’ve gotten a set number of votes. It seems a little daunting, but as your vote count increases, they give you pointers, as well as editing and marketing advice, to help you reach your goal.

I’m actually getting really close to my next goal! So if you wouldn’t mind, take a moment and click on the form below to vote for my story. It takes less than a minute, and you’d be helping me to make my dream come true!