Last week, we talked about how important it is to get involved with social media. It’s important for everyone who’s trying to get people interested in whatever it is they’re selling, or just sharing (like a blog that’s not meant for money… *ahem*), but it’s especially important for authors these days.

As you might remember, I had said I was helping an author friend of mine with his marketing. It helps me to get back into the game, and helps him get readers to sell his book to. It’s a win/win situation. So, for a while, I’ll be devoting Mondays to marketing tips. Marketing Mondays seems a fitting title, in my opinion, and it’s so hashtaggable… is that a word?

If not, it should be, as hashtags are so very important for Twitter and Instagram, and I imagine Snapchat. I’m still leery of that one… I’ll get there, but I’m not ready to get into it just yet.

Today, though, I want to talk about Twitter, because, well, I’m really good at Twittering. Not just “tweeting,” which is part of it, but the whole Twitter experience. I know, tweeting is really all anyone talks about, but Twitter is really so much more than just tweeting about things you’re involved in, or to share your blog posts, or your book updates, or your latest gizmo, or a favorite news article, or whatever.

Basically, Twitter is a great place to get started if you’re uncomfortable with the social media landscape. It’s the equivalent of being in a chat room from years ago, but it’s more like being in a cafe, with multiple conversations happening around you, and the TV is on (advertisements) and there’s an occasional guest speaker… plus a group discussion guided by hashtags in the corner.

There’s kind of a lot going on, basically.

Also, I may be showing my age by even bringing up chat rooms…

Once you’re on Twitter (and remember, your profile pic, or AVI, should be the same as that on your other social media sites), the best way to get your ideas noticed is to make sure you’re tweeting with a hashtag. If you’re an author, and you want people to know something about what you’re writing, include #amwriting, or # plus the genre. For instance, I’m writing a paranormal romance novel, and I promised that I’d have updates posted by now. I’m behind schedule posting, so I tweeted this: Behind schedule, but still #amwriting my #paranormalromance novel. Updates to be published later today on @tablopublishing

Behind schedule, but still #amwriting my #paranormalromance novel. Updates to be published later today on @tablopublishing

Please note that I also tagged someone, @tablopublishing, so now all their followers will see the tweet as well, and, since this particular tweet is sort of marketing their product as well, it’s in their best interest to retweet it, meaning even more people will see it! That’s another trick: be sure to tag people to get your tweet in front of as many followers as possible, but be selective. There are rules of etiquette, which we’ll have to touch on some other day.

Back to our tweet… My hashtags ensure that people who are curious about works in progress (also hashtaggable with #WIP) or specifically paranormal romance novels can look up those hashtags, and my tweet will show up.

Last week, we also pointed out that the reason why all of this social media business is important is because it’s absolutely 100% necessary to be current, i.e. “trending.” Like with my Beyonce debacle, I wasn’t fast enough to ride the coattails of that hashtag. A few days earlier and I would have been, but I was just too slow.

Twitter chats use the same hashtag, so if you have enough people in the chat, it’s likely to come up as trending. That’s how the trending thing works: it’s some sort of algorithm designed to monitor what people are talking about, by counting hashtags.

This is why Twitter chats are so very important if your goal is to grow your followers on Twitter, and as an author whose mission it is to get the word about your book out to as many people as possible, the more followers the better!

Twitter chats work with the hashtag, and there are a number of ways you can follow it. The first way I tried (because I was completely new at it and didn’t know any better) was to simply do a search for the hashtag and then click the “Live” button. I mean search on Twitter, not Google. There is search button near the upper right corner of the screen. Search there, and then it shows exactly what tweets there are, and so works like the chatroom, but much slower, and it doesn’t auto refresh, meaning you have to keep refreshing the page to see what everyone’s posting.

The next thing I learned about was Tweetdeck, which is free and is affiliated with Twitter, so it’s totally legit. It can do all the things Twitter can do, plus it lets you see EVERYTHING. And I do mean everything! It shows you your notifications, your Direct Messages (or DM’s… which used to have a different meaning back in my DnD days), any searches you’ve told it to save, which means you can actually do multiple chats at once, so long as you’re sure to remember which hashtag goes with which chat! I’ve yet to successfully try that yet, but I know people who do up to 3 chats at once that way. 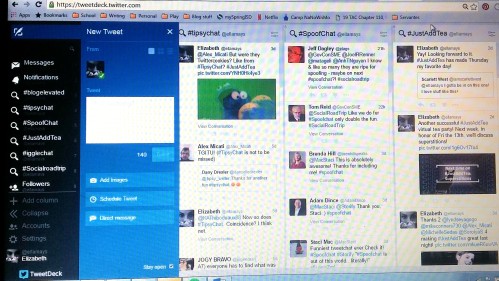 The point is, it’s doable. I’ve heard plenty of people complain about Tweetdeck, but I have no problems with it. In fact, it works really well for the way my mind works.

Besides, for whatever reason, Tweetchat doesn’t work on my computer, so I’ve yet to try it out. Other people assure me it’s the best thing out there, and one day, same as with Snapchat, I’ll give it a go.

Of course, part of the trick is finding the right Twitter chat for your audience. There are all sorts of sites that are supposedly designed to help you find what you’re looking for. Tweetreports.com seems to have the most extensive list. There are other ones, like Tweet Salad, which has some nice things listed, and will send you an automated reminder tweet for your chats, but it doesn’t seem to be updated very frequently. You can Google “Twitter Chats” and find several other places that will help you find what you’re looking for.

Of course, if you’re looking for an easy chat to get you started, you’re more than welcome to join the #JustAddTea twitter chats on Thursdays. I didn’t write this post with the intent of shamelessly plugging Thursday’s chat, but with our third chat, we’ve gone from 10 to 20 people in the chat (alright, there were about 14 active, but several who checked in and a few who apologized afterwards for missing, so I’m counting them!), which is enough to keep it moving, but not so many that it would be difficult to keep up if you’re new to the Twitter chat format.

Thus it’s not a plug, but an invitation… Seriously!

This Thursday, in honor of the following Friday the 13th, we’ll be discussing Superstitions!

Hope to see you there! And if you have a favorite Twitter chat you participate in, please list it in the comments below so we can help each other out. More people in the chats means more likelihood of your tweets getting to more people, and more followers!

1 thought on “Marketing Monday: The Joys of a Twitter Chat”