I’m torn. On the one hand, I feel very strongly that we need to keep talking about what’s going wrong since Trump won the Presidency. On the other hand, I’m kind of tired of losing my friends.

I have argued against the concept of white privilege, and done so quite loudly, for a while now. I wrote a while ago about how Gentrification was not a race issue, but a class issue. Even last week, I had a conversation with a friend (possibly even the day of the election) about how “white privilege” isn’t really white. It’s based on a variety of stereotypes, very few of which are true to be sure, but it’s not just inherently about being white.

But my world keeps getting smaller and smaller because a lot of my friends seem to have this mysterious white privilege, and I… Don’t.

Now, I have a slightly broader understanding of it, and that is completely in due to the country’s decision to vote a bigot, a racist, a sexual predator, a xenophobe, and a liar into the most powerful position in our country. For those who voted for him because they felt that he would create change, I only have this to say: which of his promises do you expect him to honor when he would deny things it was proven he had said?

He flip-flopped, continuously! on the issues, one day making the blanket statement that Mexicans were rapists and drug dealers, and then saying that’s not what he said or what he meant. Then going back and saying he meant it.

Or perhaps that was one of the few things he didn’t go back on. Which makes it simply a hateful, racist thing to say. And that is a bell he cannot unring.

Several people have pointed out that he managed to tap into the anger and angst of a particular disenfranchised group of people, some before the election, as seen in the clip by Jon Stewart below, and some in hindsight. And he did. He managed to take the idea that middle class America was losing their jobs and their way of life because of immigrants and terrorists, and blow it up 1,000% until people were willing to overlook the fact that he got there by being a horrible person.

I particularly love how Jon Stewart points out the inherent issue of Trump saying he’d be presidential when the time becomes necessary. It suggests that the people who voted for him assumed he would suddenly be a different person when he became president. And if that’s the case, how can you be so certain that the different person he becomes is the person you really want him to be?

Are we not supposed to take him at his word? If he “says it like it is,” that means he’s honest, and yet time and again he’s proven that he isn’t.

Yet his followers keep claiming Hillary is the big criminal and the big liar. Maybe she is. Maybe it really was time to change the system. I voted for a third party, so I completely agree with that sentiment.

But I chose to vote for a third party instead of voting for a candidate whose primary message was hate.

Elizabeth Warren explains it here, and she goes on to explain what is inherently wrong with the system to make him seem like such a good candidate to those working class people, who I sincerely hope aren’t as hateful and ignorant as the bigots who are committing hate crimes in his name, but God help me, I can’t help but think they must be.

The part of all this that astounds me the most is that there are actual accounts of hate crimes being perpetrated and people keep burying their heads in the sand about it. I’ve heard that it’s simply a trick of the liberal media, or that I’m only seeing it because I live in the city. I’m told that I should just get over it, and learn to deal with it because now “we” get to see what “they” felt for the past 8 years…

But there is a huge difference! I don’t remember Obama ever saying he was going to throw anyone out of the country because all people like them were racists and drug dealers. Obama never suggested that he’d hit someone at any of his rallies. Obama never made up his own statistics and said that he shouldn’t be held accountable for having incorrect information.

Obama was not backed by a hate group…

And people weren’t attacking their fellow Americans in the name of Obama.

Minorities do not feel safe and, as the image from the top of this post says, if you tell these people that they just need to get over feeling threatened by THEIR PRESIDENT, then your privilege is showing.

And don’t even get me started on his running mate: the homophobic, intellectually devolved Pence.

This is not normal… And I don’t know how to make this okay for myself, let alone anyone else.

The violence continues to rise, and I don’t know if it’s ever going to get better.

That sounds like he’s saying the words, but doesn’t have any truth behind them.

But perhaps I should be careful what I say. Twice, the people who speak for him have hinted that he will retaliate against those who have spoken out against him. (Skip to about 12:23 in the video below)

That is the reaction of a dictator. Not a president.

But I’m not surprised. Just look at his tweets from his personal Twitter war with Jon Stewart (who did call him Fuckface von Clownstick) : 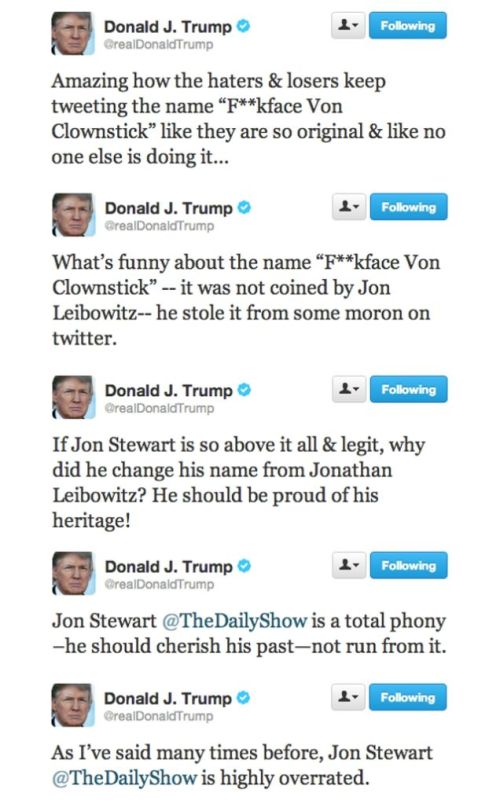