I’m writing at the very end of our Weekend time this week, so if we were sharing our lives over coffee, mine would be more milk than coffee in honor of Imbolc, which I’ve somewhat been celebrating all weekend long.

We’d also be watching the Super Bowl since that is also going on at the moment.

No, I’m not a big sports fan, but I do enjoy a good game (which thus far, this one has been), and I also enjoy watching the Super Bowl commercials.

Plus, things with the new guy might mean I need to work on my sports enthusiasm. I’m accustomed to watching sports with my dad and one of my brothers anyway, so it won’t be a big stretch, but this new guy does seem to be a bit of a sports nut. We even discussed that he wishes he’d been more involved in sports in high school because he thinks he could have gotten a football scholarship if he’d wanted to.

It would have changed the entire trajectory of his life, though, so I’m kind of glad he didn’t.

Things with him have been… interesting. We were moving rather quickly, and he’s taken it to a full stop, and what I thought was reverse, but it seems that (at least if he is to be believed) he’s trying to be more respectful. He wants to really get to know me and see about something more serious. So while we did get intimate, now we’re at a much, MUCH slower pace. There has been some kissing, but it’s been so chaste it’s almost like kissing a relative.

I tried to initiate a more intimate kiss, and he told me he just wanted to chill. While I didn’t cry right away, I did cry the whole drive home, thinking that was proof that he was done. It almost always is a sign that the guy is done.

After driving through the rain, with my own little rainstorm pouring down my cheeks, I texted him (these days, no one calls) and told him I was home. He responded as if everything was fine, and I was so confused! I don’t know how to read this zero intimacy, nearly platonic thing we’ve got going on at the moment.

So I let him know that if he wasn’t interested, we should just stop.

And then he let me know that he didn’t want to stop, he was just trying to slow down because it’s not an easy decision to be with someone, and he felt like I’d pushed him too fast. But he definitely still wanted to get to know each other because he thinks there’s definitely a good possibility of something here.

I’m not sure how I feel about all of it, but I’m playing along for the moment.

I mean, it feels like perhaps this is the right thing for the moment. Given that Imbolg, which heralds the beginning of Spring and the awakenings of our true desires was on the same day as that conversation, perhaps it was a sign that I need to slow down and let this grow the way the flowers grow below the surface before they burst through the soil in the warmer weather.

After all, this is the time to envision what it is we really want and to begin thinking about the path it will take for us to get there.

Brigid of the Sacred Fire and the Holy Well opens her arms to embrace us, heal us, and fill us with the energy to create our truth. 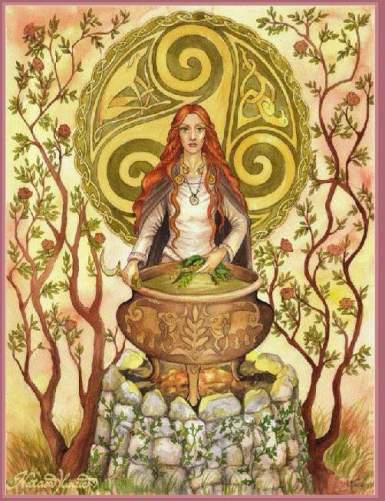 So, the question is if the path I see with this guy is true? Is it what I want?

If it goes the way I feel it will once he allows himself to relax into a less… Puritanical way, then yes, yes it really is something I want.

My past experiences have made me feel the need to go in fast forward because if I let them linger too long, the guys always decide I’m not pretty enough, or that I’m too fat, too talkative, too smart, too complicated, or in some other way just not right for them.

The result has been that most of my relationships last about 6 weeks or less, and then I have exceedingly high hopes for anything that lasts longer than 2 months. Even if those 2 months were unhealthy.

Maybe this guy and his old-fashioned views will be good for me.

The rest seems to be going well. I joined a gym, though they are trying really hard to talk me into having a trainer, which I cannot afford. The sales guy was very condescending about where I could pull the money from, but all he did was make me reconsider my membership there altogether. I’d already lost 6 pounds when I started, but I didn’t want to tell that guy that. He was really going on with his spiel.

At work, I’ve been keeping up with my grades and things, and while things feel very up in the air, I feel like I’m in a good place for now.

I think one of the things that helped me succeed at work was my bullet journal.

Last month, I kept up with my bullet journal and even kept up with most of my goals, though not the writing ones… My theme in my BuJo for January was the Phoenix, and the word was “re-establish.” I re-established old routines and started some new ones.

My BuJo theme this month is Candy (more specifically chocolate, the new guy pointed out that Candy was too vague). Because Life (and love) is Sweet. 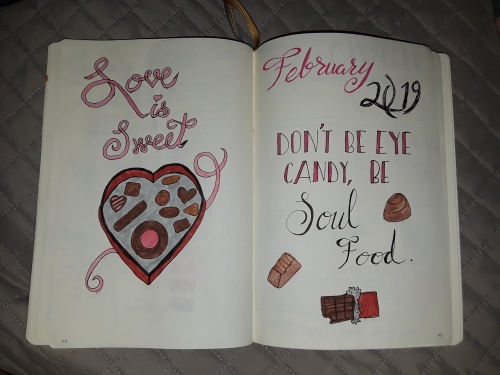 Since my word for the whole year is “Renewal,” I want to look at that from a new angle, and my word for February in my BuJo (and my life) is “Rejuvenate.” One of the things I’m obviously adding new energy to is my relationships, so that will be my focus on here and in my #JustAddTea chats this month.

So thank you for listening to me ramble on about my life today. I hope to see you around the coffee share, and maybe you can stop back by when I’ve got some more content up about relationships, especially on how to cultivate them in writing. But that’s it for today. I’m going to go back to watching the game.

If you want to be part of the new coffee share, check out the new host:  Eclectic Alli, or go straight to the link-up here.